I love General Tso’s Chicken. It was always my go-to dish whenever we would order Chinese Food back in our pre-paleo days. When I heard that there was a recipe for it in Gather, it was just one more reason for me to get the book. The recipe is a bit complicated though, so I hadn’t gotten around to making it yet. However, I thought I would give it a shot. I made it, and the shrimp fried cauliflower rice, but I substituted leftover Chinese Barbeque Pork in place of the Shrimp in the recipe.

To minimize the amount of work at dinner time, I chopped as much as I could ahead of time. I did this during nap time, figuring that it would be easier for me to get dinner made if I had a few things done ahead of time. It did help, but as soon as I turned the sauce on, the baby started crying. I didn’t want to risk burning the sauce, so I just turned it off. It turned into a giant goopy mess. I was able to thin it out by adding some of the oil back into the sauce, but it was still frustrating. I thought for sure I had ruined dinner. I actually ended up really frustrated over all trying to get this recipe made, and take care of the baby. As delicious as this recipe was, it’s just not new mom friendly at all. 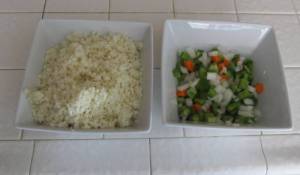 This site uses Akismet to reduce spam. Learn how your comment data is processed.

I’m Jessica, but you can call me Jess. I am a mother of four, who, through dietary changes was able to get a handle on my chronic illness, improve my fitness, and start enjoying more adventures with my family.

This isn’t a sponsored post at all, but I just r

This strawberry fields salad is made with spinach,

I’m so excited to try this #MyRiceWash #complime

I’ve been trying to spend more time cooking with